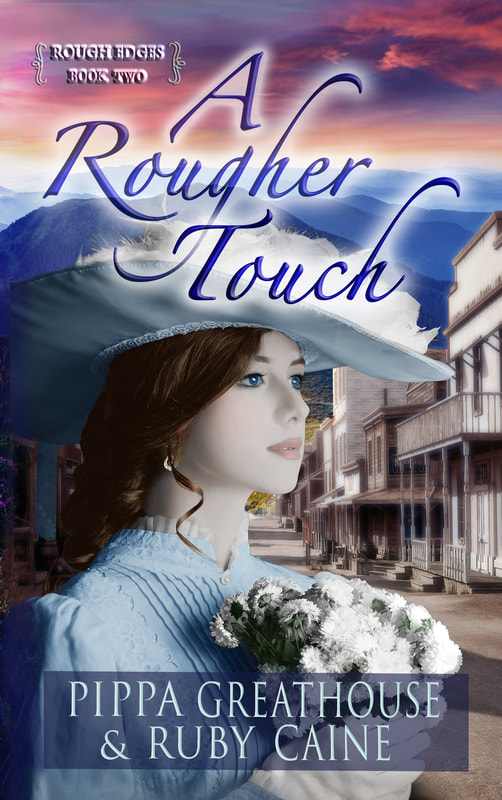 He moved closer. She carried a small bouquet of white flowers, but they were grasped so tightly in her small gloved hands, they looked as if the life was being choked out of them. She had on a blue dress that was the exact blue of her eyes, and a matching blue hat covered with white feathers. He found himself tilting his head downward to see her hair. It looked dark; the exact color he couldn’t tell.

When he heard a girl’s giggle from his left, his blue-eyed young woman turned to see who it was. Joe’s mouth grew flat. It was Jenny Spade. She was pointing at the young woman’s hat and laughing.

Tightness built in his chest as he saw the reaction of the girl in the doorway. Her blue eyes grew wider, then slightly sad, and she took yet another step toward the entrance.
Feeling as if he needed to do something, he strode toward her to stop her exit. Suddenly, she spotted his sister, and moved slightly away from the door.
He relaxed, watching.

He stared. What a delightful voice she had. He stayed out of sight just far enough to be able to keep an eye on her as Allie threw her arms around her neck. Relieved, he watched her move another step or two away from the entrance.
So, she wouldn’t be leaving after all. Good.

Allie was looking around the room, suddenly. “I’m sorry, Bethy. I’d hoped to introduce you.”

Was that disappointment that clouded the lovely young woman’s eyes? She was shaking her head now, and an auburn curl fell over one shoulder.

“No, it’s all right. I was just hoping to meet him, that’s all, since you spoke so highly of him on the trip.”

He knew who she was now. She was Allie’s friend Elizabeth. He took a step toward them. Both girls were turned away now, but from the corner of his eye, he saw Jenny Spade rise from her seat and move in his direction.

From behind Elizabeth and Allie, he spoke. “Looking for someone?”

They both jumped and turned. Those blue eyes he’d been admiring since the moment he arrived were mesmerizing. He couldn’t help himself. He was grinning at her expression.

Allie’s eyes were sparkling as she glanced from him to Elizabeth. She was saying something, but for the life of him he barely heard anything except the words Beth Harris.

The young woman gazed upward, her mouth slightly open, but her voice seemed to be absent.

“Miss Harris,” he spoke, keeping his voice deep. “You shared a stage all the way from Philadelphia with my sister? My utmost apologies, Miss.”

Allie smacked his arm. But it was Beth’s expression which surprised him. Those gorgeous eyes flashed with blue flame as she suddenly found her voice.

“Apologies… not accepted, Mr. Castle. I admire Allie,” she paused to moisten those luscious lips, “more than anyone I know. She saved our lives on the way here.”

He watched as she continued speaking, fighting the urge to take her into his arms and silence those lips with his.

“Yes, I heard about that.” He knew he was showing amusement, when she blinked, and shook her head, causing the curls to bounce.

“Then—then…” She paused. “Then, behave yourself.”

Joe was no longer amused. His smile disappeared, and a brow rose, warning taking the place of mirth.

She seemed to realize it too, and her hand flew to her mouth. Allie reached for her arm to lead her away a few steps.

Beth glanced back at him, her eyes large and penitent, before turning back toward Allie. Their voices were lost, but Beth’s shoulders seemed to sag.

Allie was shaking her head, and Beth was looking sorrowfully down at the floor. On his right, Jenny began once again to slowly approach. But she stopped suddenly as Miss Harris began to turned toward him from his left. He pivoted slowly on his heel, giving her a look of warning.

She barely met his eyes before lowering her gaze. “Mr. Castle, I,” She spoke in a whisper. Licking her lips, she tried again. “I apologize. I should never have…” Another pause.

“Quite right, young lady. And I don’t expect it to ever happen again.”

She looked down, and turned as if to move away from him.
Joe encircled her wrist, bringing her closer. When she looked up, her expression was wary. He lifted his mouth on one side, and took the flowers from her hands. She’d been clasping them so tightly the palms of the white gloves bore tell-tale greenish stains. She gasped when she saw it.

Joe removed the blue hat from her, and set it on the shelf above her head. Her hair was an auburn color that complemented the fairness of her skin perfectly. The flowers, he took a look at. With a brief glance at Jenny, who was still scowling at Beth, he held out the flowers.

“Miss Spade, would you mind holding these while I take this young lady for a dance?”

Jenny’s mouth fell open. She stared, as he pressed the flowers into her hands and drew Beth out onto the dance floor, his arm about her waist.

“That was mean,” she whispered, with an apologetic glance backward at Jenny.

“No more so than the way she was treating you this evening when I first saw you. I noticed you trying to sneak your way back out of the dance hall.”

Her face began to grow crimson, and he stopped. Taking one of her hands, then the other, he removed her white gloves and tucked them into his pocket. By the time he finished, her face was completely scarlet. 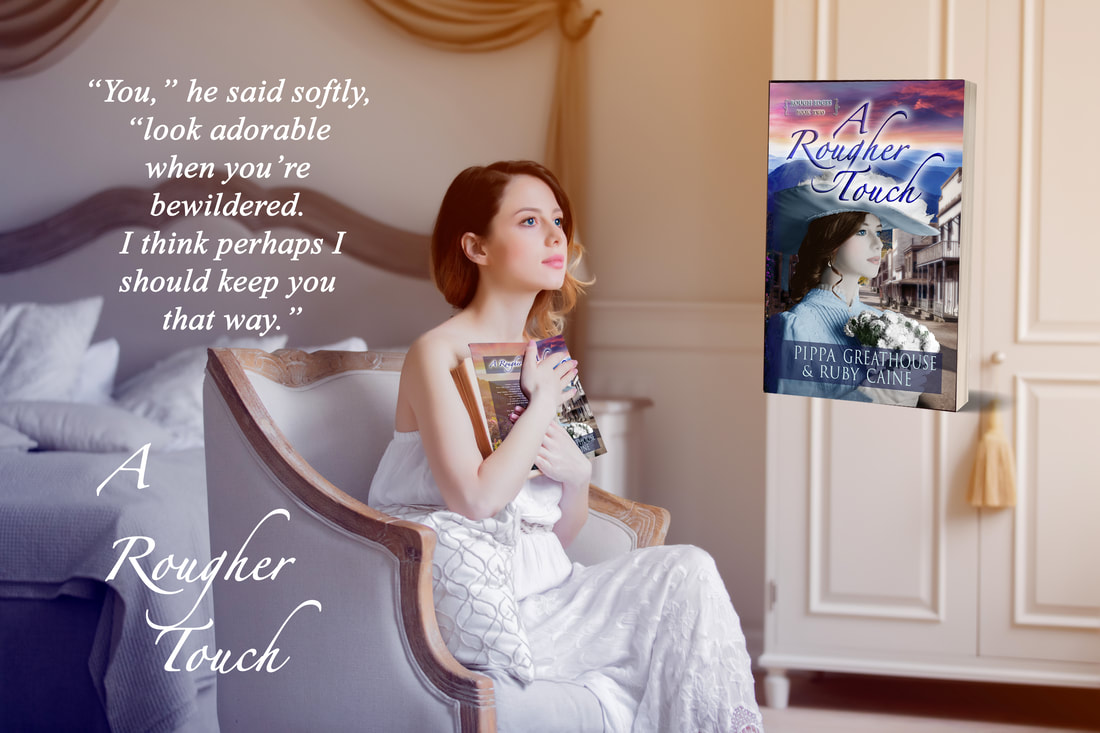 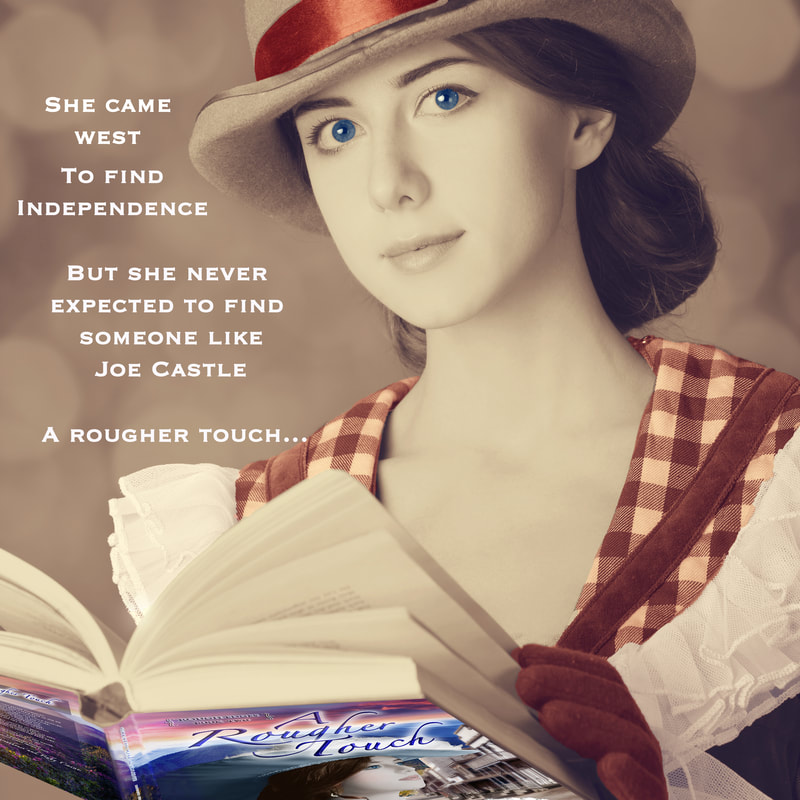 In celebration of the release of book two, book one, Rough and Honorable, is on sale for 99 cents from May 9th through May 17th!

amazon Rough and Honorable sale price through May 17th
Books2Read 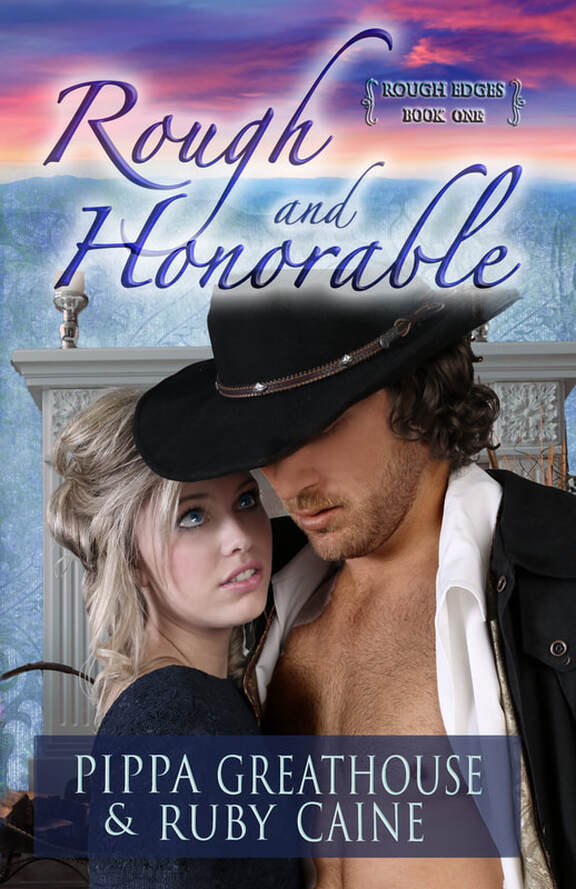 ​Allie has no idea what

awaits her when she's sent  west

Her brother Joe seems to be

she once was. Does he even


Nate Winchester is waiting too.

He's already rescued her once.

Who will he see next?

Alexandra, full of grace, charm and

Or Allie the hellion?

​
To your favorite bookstores
amazon.com
Pippa Greathouse and Ruby Caine

are at it again,

To your favorite bookstores
A sneak peek...


“Just what were you trying to do, young lady? Run down the entire town?” His deep tone demanded an answer. The outrage in his voice brought her back to the realization they had stopped.


Her face felt hot as she glanced around at the crowd of people staring at her. She’d lost her matching bonnet, and her hair had come loose from its ribbon.


As she tried to smooth it down, she found it had become tangled into a mass of curls that were wild and unruly. Furiously, she pushed them away from her face.


The stranger was staring down at her with narrowed eyes the color of rich, dark coffee. His gaze was stern, his voice demanding as his jaw  pulsed in anger.


“Of course I was.” Sarcasm crept into her voice as her eyes flashed. “The driver needs a doctor--quickly. He’s very sick. And I’ve never driven ateam this big before so—”  The words came tumbling ​out quickly.
​ 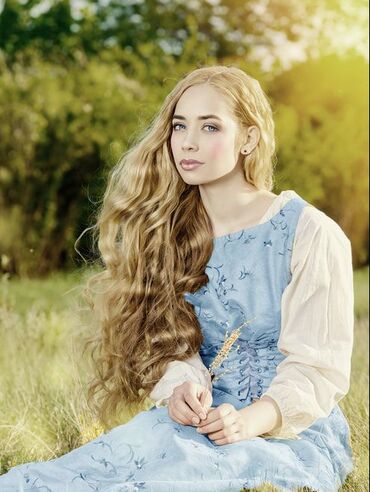 To your favorite bookstores 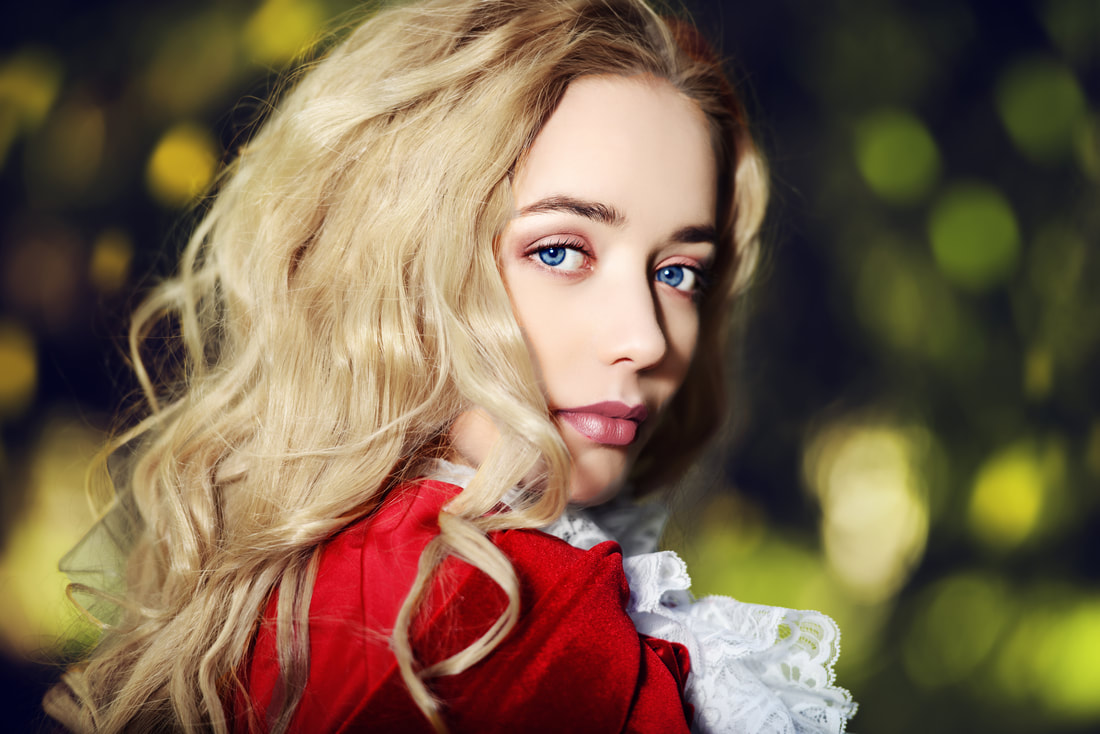 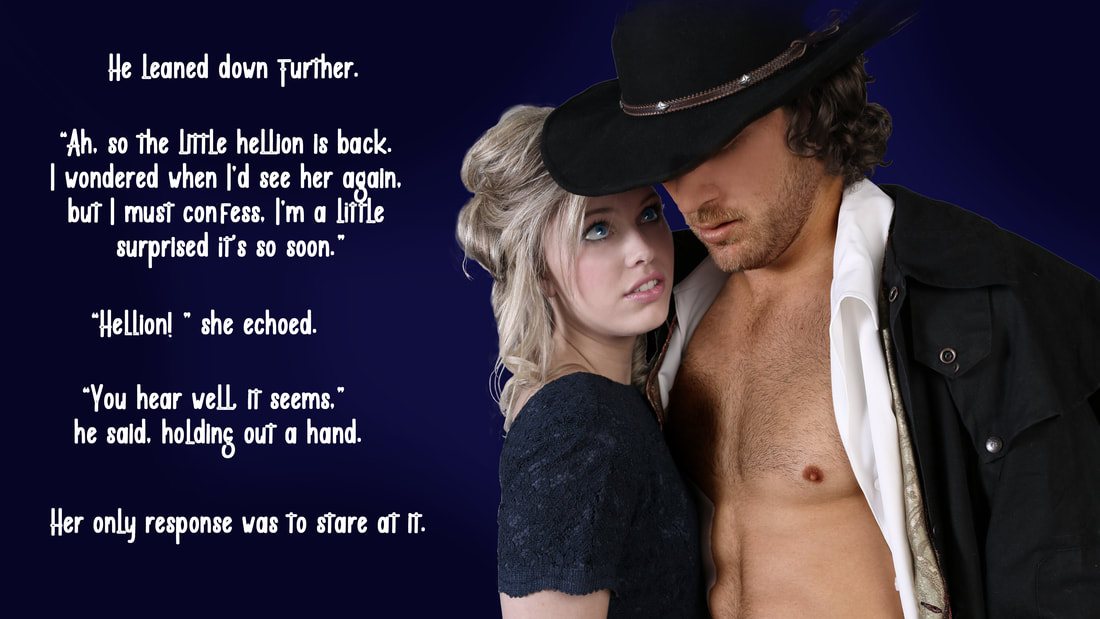 In the next book...
A sneak peek at Beth and Joe.
​
Beth tried to resist and he took hold of her upper arm with his right hand. With his left, popped her bottom hard, ignoring her protest. Marching her back to the dance hall and inside, he released her.
Her face flared, hot with embarrassment; she felt it. People were staring at her, and she looked away. The girl named Jenny had an expression of curiosity on her face which seemed to turn to a smirk. Beth glared  at Joe and walked away.

Glancing around the room for Allie, she found her dancing happily with Mr. Winchester in the middle of the room. At least Allie was enjoying herself.

Backing up a few steps, she leaned against the wall next to the door.

“Don’t you dare move,” Joe’s voice caused her to glance up. But he was taking long strides now toward the table set with refreshments, and she noticed that she wasn’t the only one watching him. Several girls hovered near the table, their eyes, which had been on her as they came back inside, were now centered on Joe.

She turned away, determined not to watch. How dare he order her to stay here and then walk away? If she saw a man standing alone, she’d ask for an escort home. She moved toward the shelf where her aunt’s bonnet sat. The now wilted bouquet of flowers lay next to it. Reaching for the bonnet, she jumped at the firm, deep voice behind her.

“What do you think you’re doing?”

Beth didn’t turn around. The bonnet in her hands now, she proceeded to put it on. “I’m going home. I’ll find someone to escort me, you needn’t worry about it.”

She whirled about to face him, her eyes blazing. His face was above hers, and the pulse in his jaw quite noticeable. “My I have my gloves, please, Mr. Castle? I believe they're still in your pocket.”

“No, you may not. I brought you some refreshments. What I will allow you to do is to sit down on the sidelines with me until they’re gone. Then, if you still wish to go home, I’ll take you.”

The reflection of something shiny met her eyes, and she looked down. He was holding out a cup of punch. The lamplight in the room left shimmering reflections in the red liquid.

Slowly she put the bonnet back on the ledge and reached out to take the cup.
​
“Good girl,” he said. “Now, come with me.”

"A Rougher Touch", (Book Two) is coming in late January or early February.